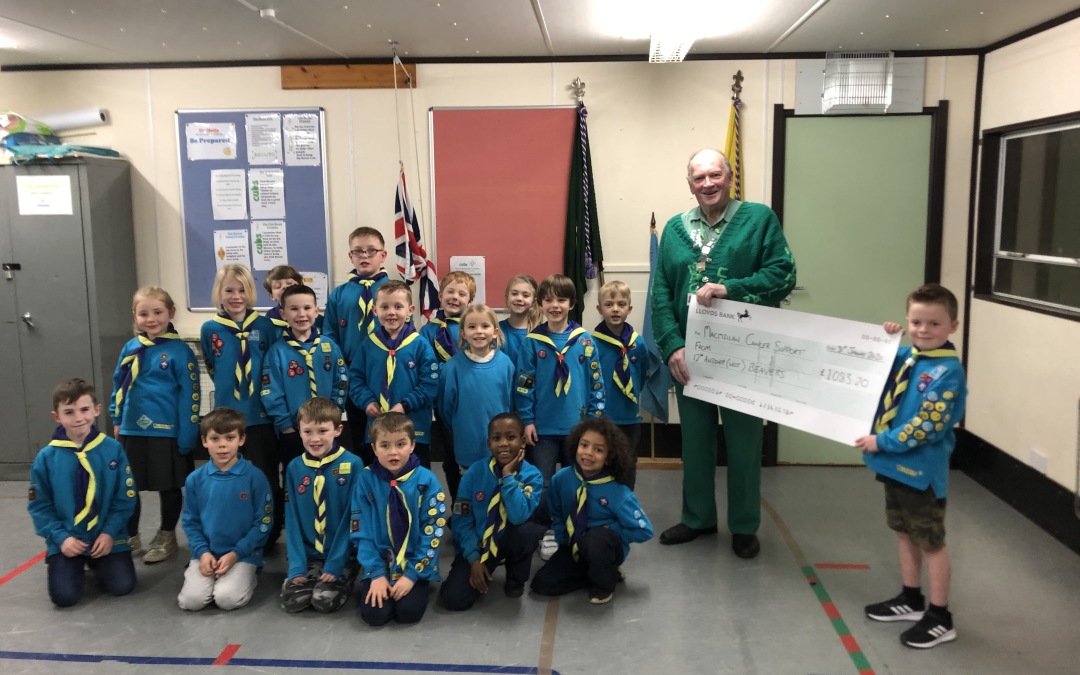 Our wonderful Beavers spent some of last year doing all sorts of sponsored events such as a hike and selling things in order to raise money for the Macmillan Cancer Support charity which provides dedicated nurses for people who are ill as well as financial support for those with the disease who are in need and many other things. Brian (the chap in green in the photo) who is a Macmillan volunteer (and who has been awarded Macmillan volunteer of the year on 2 occasions) came along to speak to the Beavers about what Macmillan do and to hand out small gifts to the young people. After this the Beavers handed over a cheque to the charity and they had collected the amazing sum of £1083.20

What a terrific achievement by all our Beavers (with a little parental help no doubt). We are so proud of what they have done and thank you to Rowan, Kirsty, Hawkeye and all the parents who helped too.

As part of their badge work the Beavers were required to select a charity that they wanted to raise money for.  They then needed to decide how they were going to fund raise for their chosen charity.  After a group discussion the 12th Andover (West) Beavers decided that they would like to raise money for Macmillan Cancer Support.  They also decided that they would hold two events to raise funds.  The first event was to be a night hike and the second event was to hold a cake sale.

The night hike took place on a very windy, cold, dark evening in November.  The Beavers are aged between 6 to 8 years old and so for some of them being out in the dark proved to be quite a challenge.  They all supported each other and did amazingly well and not only did they all complete it but they also managed to raise lots of money for the very deserving charity that they had chosen.

The second event was the cake sale.  During one of their Friday meetings, the Beavers made and decorated biscuits to sell, along with cakes brought in from home.  At the end of the evening they used their sales skills and sold them to their parents.  This raised even more money for Macmillan Cancer Support.

On Friday 31st of January, the Beavers were very lucky to receive a visit from a Macmillan Cancer Support volunteer, who explained how the money that they had raised would be used by the charity.  The 12th Andover (West) Beavers then presented a cheque for the sum of £1083.20, a very impressive sum for which they should all be very proud.